The team is made up of a wide array of students from a wide range of departments including:

This provides a large pool of young talent that allows the team to be able to perform well in all aspects of the project.


Staffordshire Uni Racing is competing in Formula Student for the 4th year in a row in July 2020. The target for this year is to finish in top-30 considering the amount of work that has been put down in this year’s project.

What is Formula Student?


Staffordshire Uni Racing is competing in Formula Student for the 4th year in a row in July 2020. The target for this year is to finish in top-30 considering the amount of work that has been put down in this year’s project.


The winner of the event is the team with the highest number of points out of a maximum of 1000.


The competition is considered as a kite-mark for real world engineering experience by combining practical engineering experience with soft skills including business planning and project management.
Each year, Formula Student sees over 100 university teams from around the globe who will travel to Silverstone to compete in static and dynamic events that will test their preparation, skills and hard work.

The big question is:


The target for this year is to finish in the top 30 in Formula Student UK 2020. To achieve this, the team want to compete in all dynamic events, something the team is yet to achieve. To ensure the team does this, each department have been tasked to have all systems operational 2 months before the event. Greater resources have also been assigned to the preparation for static events, with the team having a dedicated business and management representatives for the first time. For 2020, careful attention has been given to the team’s structure to ensure that new students remain with the team throughout the year. A buddy system has been implemented, rewarding first year team members with a specific role while paired with the most experienced team members.


2018/19 was a transitional year for Staffordshire University, only 2 of the previous years, team members were part of the team. This was down to the graduation of the vast majority of the team and others left of a placement. In order to increase performance, the decision was taken to produce a brand-new car. This pushed back much of the manufacture of the vehicle. Despite this, the predominantly 1st year team, worked incredibly hard, prioritising the production of the vehicle over their own sleep. This determination enabled the team to launch the new vehicle at The Swift Gallery in July of 2019. It also enabled the team to carry out minimal testing, something that was not anticipated during much of the project. With this optimism, the team yet again passed all of scrutineering and was on track for the endurance event. However, due to the limited budget, the team had to use many components that featured on the 2018 vehicle. These components failed during the second lap of the endurance event. The team was able to repair the vehicle to enter it into the hot lap shoot out at the end of Sunday. With a team made up of 9 people, with only two remaining from the year before, 2018 was a success for the team, improving on its previous results, finishing 62nd overall.


2017/18 was a hugely successful year for Staffordshire University. The team took many design philosophies from the previous year but significantly improved the manufacturing time. This year the team had a more diverse base, being made up of all years of study (1st through to masters). In 2018, The team passed all of scrutineering for the first time, going on to complete in its first endurance event. The team completed 11 laps of the endurance before having to retire with a mechanical failure. Despite the disappointment of not completing the Endurance, the team won the “Breakthrough Award”, showing how much the team had improved. Overall the team placed 68th.


2016/17 was the first year for Staffordshire University in the Formula Student competition. The Team was made up of 3rd year and masters students. 2017 was a massively steep learning curve for the team as it got to grips with the design, build and engineering of a vehicle. This included the mock-up and build of chassis using Balsa wood as it has a similar strength to steel box section when scaled up. The next stage of the build was to create the Chassis in Box section and then Tubular steel to test it. Due to the small nature of the team, the car that was built, never made it through scrutineering. 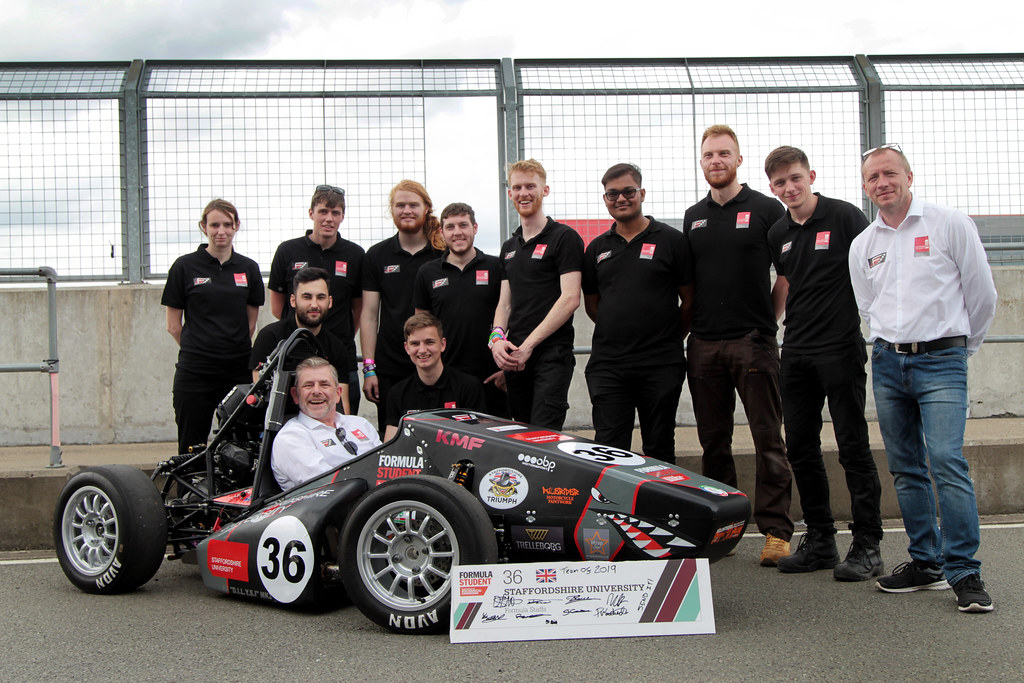